They don't think they could go in there and be critical of any Democrat because Doomberg's their boss. But no such problem exists covering Trump, so I'm kind of surprised this one made the cut.

Before I forget this, I saw a tweet. Well, that's the wrong way to put it. I don't read Twitter, I don't go to Twitter. It is a sewer, as far as I'm concerned. It's where you go to ruin and destroy your career. See Antonio Brown, if you want evidence.

So people send me things they see on Twitter. And so somebody sent me a tweet that Byron York put out there. And Byron York's tweet was essentially: With a couple of more great economic reports like this in the next few months, the Democrats are set up perfectly for being able to start talking about a recession.

Now, let me ask you, why would that be the case? We've got a great jobs number last week, 266,000 new jobs, record low unemployment, three and a half percent, wages skyrocketing. Why would the Democrats be hoping for a couple of more of these? Because about, oh, next June, where else can you go but down? So if they start talking about a recession, if they start trying to persuade people that there's nowhere to go but down now, yeah, the economy's really trucking, but we can't maintain these numbers with Trump's policies. They're gonna try to claim this is all the residue of the Obama presidency.

So I just want you to be on the lookout for that too. They're gonna start talking. They may not wait for another good economic report. They may take this one and as their reaction to it, start promising, getting all of their economists and experts on all the cable news networks and start predicting the recession is imminent, an economic downturn is imminent, an economic downturn's unavoidable because we can't do any better than we're doing now. So be prepared.

Now, what will be the answer to that? Well, that's also easy, if you ask me. Biggest mistake in the world that people in this country could make would be to get rid of the administration and the ideas that created this economic circumstance. Why in the world would we want to go back to the party that tried to tell us that a declining U.S. economy was the new normal and that their job was to manage it and that you should lower your expectations? Because that's what the Democrats are gonna be offering. Why would anybody want to go back to that?

Anyway, this story in Bloomberg. "Don’t Look Now, But Things Are Getting Brighter for Trump.” I got a note over the weekend from my good buddy Professor Hazlett who's now at the University of Clemson. He's a telecommunications law expert now and economist. When I met him, he was an economist at the University of California Davis way, way back there 1985 I think I met Professor Hazlett. He was back out in California near the UC Davis campus. And he said, "You know you go 10 miles east, you get to Dixon, California." He said, "You wouldn't recognize. There's nothing but America-made cars there and look at this." And he's got a picture of a gigantic Ford F-150 with a Rush license plate on it, not bumper sticker, but a Rush license plate.

And then he said, "Are you responsible for convincing Pelosi to do this impeachment thing?" Meaning everybody knows it's imploding on them. Everybody except those in Washington. By the way, I was out and about all weekend, and I had not one question about impeachment. Not one. Do you get questions about impeachment when you’re with people?

In fact, what I did get, some guy zooming past in a golf cart recognized me and stopped. "Hey, hey, you gotta get a message to Trump. You gotta tell him to tone it down. You gotta tell him to stop tweeting." I said, "Oh, no, not this again." So I explained to the guy why I thought that was not right, why I think Trump should keep being who he is. But nobody's talking to me about impeachment.

And who better? I mean, if you care about impeachment and you had the chance to talk to me, you'd bring it up, right? Still nobody. Don't misunderstand, folks. I'm not off in a dreamland about this. I understand it's a television show and it's on all the networks and there are people seeing it. I'm just… I had to turn it off today. It's nothing but a pack of lies. It's nothing but a series of falsely edited videos, misstatements, allegations of what the president's thinking.

There's not a shred of evidence, and there's not an impeachable offense that anybody's been able to identify. I know what this is all about. It's a continuation of one plan and that is to get Trump on Russian meddling. And I just get frustrated when I see people on our side accepting the premise after premise after trying to refute a bunch of bogus allegations. I guess you have to do that. You know, it's my own philosophy, the aggressor sets the rules. And Democrats are setting the rules here.

Anyway, the Bloomberg story. “Don’t Look Now, But Things Are Getting Brighter for Trump -- Fears about the economy have quieted, and impeachment hasn’t been the body blow Democrats were hoping for.” Let me give you some pull quotes from the story.

“A year ago, the Federal Reserve was about to make its fourth interest rate hike. Stock markets were plummeting. Trump had just declared himself ‘Tariff Man,’ and the Mueller Report still seemed like it might be a mortal threat to his presidency.

Six months ago, fears of a recession were rising, driven by worries about Trump’s trade war and the effect it was having on jobs and economic growth.

“Today, things don’t seem nearly so bad. Friday’s blockbuster jobs report showed that 266,000 jobs were added last month and unemployment fell to 3.5%, trouncing even the most bullish forecasts and sending the S&P 500 soaring near another record high—of which there have been 26 this year. 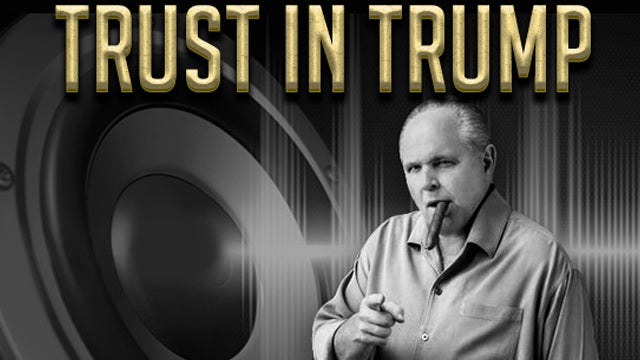 “The economy appears to be in a much better place than experts feared: good news for an incumbent president heading into an election year. In its analysis of the November jobs report, Bloomberg Economics lowered its projection of 2020 year-end unemployment to an astounding 3.3 percent.”

They think this is gonna continue. So if the Democrats are gonna run around and start promising a recession in the midst of all this, what are they gonna be seen as?

Another pull quote. “Trump’s superpower is to polarize absolutely everything—it’s the key to his political survival. That’s how he got through the Mueller Report without incurring any meaningful Republican defections. Currently, there’s no reason to think he won’t be able to pull the same trick when the House and Senate vote on impeachment. So far, his poll numbers have barely budged.”

They've gone up. His approval numbers are going up. Another pull quote. “In politics, a year is a long time. Plenty can happen to turn a president’s fortunes around. But the latest economic data and polling numbers in states he needs to win reelection suggest the impeachment fight could end with Trump in better political shape than when it began.”