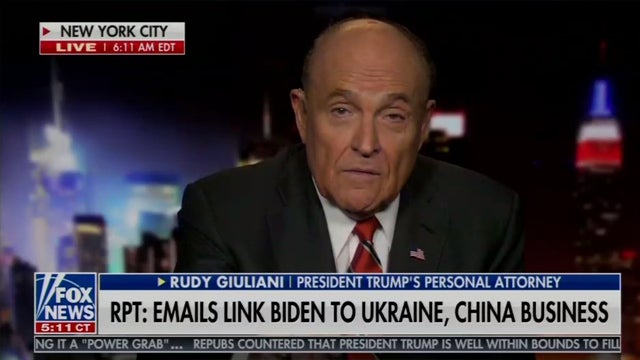 Rudy was on Fox & Friends today, and he told the story that after the New York Post story came out yesterday, that Hunter's attorney contacted the repair guy and asked for the hard drive back. Now, they have been trying to say these guys are making this up. Steve Bannon and that Chinese friend of his, they're making this up. Hunter Biden didn't have a laptop. They're just making all this up. They're putting this stuff on this hard drive. There's nothing to this.

And then the attorney makes the mistake of calling the repair guy and asks for the hard drive back, which kind of validates that it was Hunter's. Here's the sound bite. Fox & Friends today, Rudy talking about the copies of Hunter Biden's emails that he was given by the computer repairman in Delaware.

GIULIANI: I emphasize to you how this is authenticated. First of all, I did and my lawyer did. Okay, you don't have to accept that. I gave them to the New York Post and they held them for a week and authenticated them. I mean, I don't think the New York Post would publish them without being absolutely certain they're authentic. Finally, they don't even dispute that they're authentic. And I'll give you the best one of all. The big-mouth lawyer made a very big mistake. Before this was even out, when it was just they were called about it, first thing he does is call that merchant and he says, "Can I have my client's hard drive back?" So (laughing) he's basically admitting for his client -- as his client's agent -- that's Hunter Biden's hard drive.

RUSH: Which they tried to dispute originally. Now, just to refresh people's memory on this, since this did not come up last night, and this story's on the verge of fading away back to invisibility, the upshot of the Hunter Biden story is this. Joe Biden, going all the way back to his days as a United States senator -- and this, by the way, what I'm gonna tell you is from the hard drive of this MacBook Pro computer that is Hunter Biden's.

And essentially Joe Biden used his influence as a senator over many years and then as vice president to get his family hired by very prominent organizations, businesses, companies, you name it, in exchange -- this is how it happens in Washington, D.C. There's nothing untoward about this. There ought to be, but it's just the way it's done. And so Hunter will end up working over here, and then over there for a while, go somewhere else, then work for Burisma in Ukraine, work for a Chinese firm in Beijing. 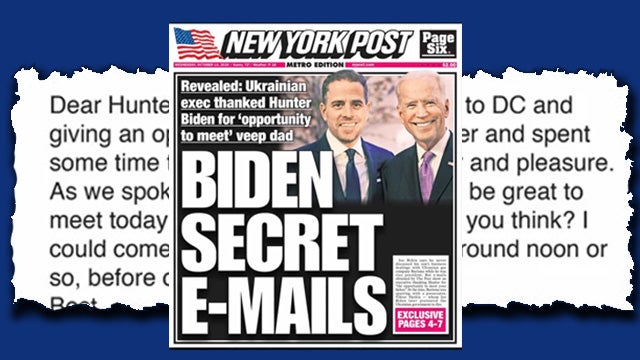 But then there's other members of the family, and they are doing the same thing. Joe is installing them in positions. And in exchange for influence that Biden is wielding on their behalf in Washington, A, as a senator, and, B, as vice president, his family is being paid. But they're as employees. So all this is to give the appearance of propriety. They're being paid for services rendered. They're on the payroll. They're on the board of directors, however the arrangement's made with any of these companies. Could be Bidens's wife. Could be father-in-law, sister-in-law, any number of the Biden family, however many of them they need.

And then what was discovered is that all of these people were instructed to give 50% of every payment to Pop. Pop is Joe Biden. And it was in this way that Biden was able to be enriched, but without any money coming directly from those firms. So any appearance of impropriety doesn't exist.

So let's say that Hunter Biden works in the company of the ABC Widget outfit. And the ABC Widget outfit is being covered for and influenced by Joe Biden in his official position as senator, and then vice president. And they're paying Biden's son for this. Biden takes whatever he's being paid, the kid, and half of it goes to Pop. That way it's not seen as payment from any firm that Biden may be doing work for, that Biden may be attempting to influence other government business for.

And what can be wrong with getting his kid a job? I mean, isn't that what every parent does? Every parent tries to get their kid work. That's what being powerful in the Washington establishment means. It means you get to set your kids up for life. It means whether they go to college or not, whether they have any brains or not, it means you don't have to spend the rest of your life supporting them. You set it up so that they are taken care of.

And in this case, however many members there were of the Biden family employed in this way, half of everything they were paid we noticed to pop. That was his tribute.

That's why the terminology yesterday referred to all this as a crime family. It's clean from the standpoint that there's no money coming from the ABC Widget company, Joe Biden. Nobody can ever say they're paying Biden for any influence.

"But wait a minute, wait a minute, son's over there." Yeah, but his son's got a legitimate job there. You can't say that it's anything illegitimate. This is the way it's done. This is commonplace. This is what nobody on the Biden side wants to come out. And this is what the laptop story basically produced. This is among many other bits of information, this detail of how the, quote, unquote, the crime family arrangements were made. So the lawyer for Hunter Biden called the repairman, said, "We need that laptop back," thereby confirming that it was Hunter's, while they were doing their best to deny that it was Hunter's.