TRUMP TOWN? New Jerusalem Neighborhood May be Named After Trump 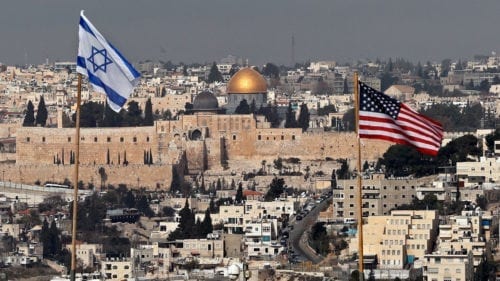 Months after President Trump announced the United States’ plan to relocate the US embassy to Jerusalem other nations have followed suit; prompting Israeli officials to construct a new diplomatic neighborhood and possibly name the site in honor of President Trump.

According to the Jerusalem Post, the new collection of embassies on the outskirts of Jerusalem may be designated “Trump Town” as an official “thank you” for recognizing the holy city as the capital of Israel.

“There is an apparent pattern of embassies moving to Jerusalem, and we have to start getting ready now,” said an Israeli official. “We might have to build dozens of embassies, and we would need new land ready for that purpose. I asked my ministry to vigorously take action as fast as possible.”

Possible names for the diplomatic enclave have boiled down to “Embassy Town” or possibly “Trump Town.”

“If that name is indeed given to the embassy quarter, it would not be the first site in the capital named after Trump by a minister in Prime Minister Benjamin Netanyahu’s government. Transportation Minister Israel Katz announced in December that he would name the train station that will be built in the future near the Western Wall after the US president,” adds the Post.

About The Sean Hannity Show