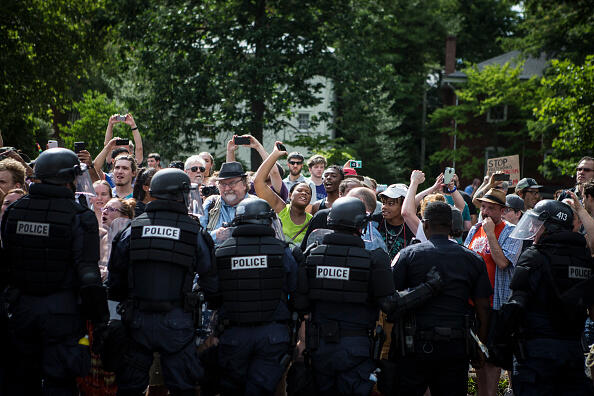 As I rode up the Garden State Parkway after a long and relaxing week on the beach with my family, my zen quickly dissipated into anger. I had been successfully unplugged for most of the week, not checking email, not watching much news, choosing instead to enjoy those all-too-fleeting moments with my children and husband. As I traveled further north and closer to home, and got caught up on the events of this past weekend in Charlottesville, VA, I felt that vacation afterglow give way to the more familiar frustration with the ignorance, violence and resulting finger-pointing and blame game.

I’m just as angered and outraged over what happened as anyone else. But my frustration is less with the original reason behind the rally (the removal of the Robert E. Lee statue) and more with the resulting call for the President to denounce ONLY White Supremacy and hold nobody else accountable for their role in what happened.

Let’s quickly get just a few facts out there:

1. The group was assembled to protest the removal of the statue. Some who showed up are proud to call themselves White Nationalists, KKK members, or members of other similar groups. Others were there to oppose erasing a part of Southern History, but don’t condone the acts or beliefs of the hate groups. Some members were armed. Some wore protective gear. Some just showed up in solidarity.

4. The day culminated with the actions of a crazy person behind the wheel of a car, running over the crowd, killing one woman and injuring dozens more. I think it’s safe to say his actions do NOT represent what either side would consider acceptable.

5. Two members of law enforcement were killed in a helicopter crash, while being deployed to the area.

What happened next? The President spoke, and condemned the actions of BOTH SIDES. While I have been quick to criticize President Trump’s sometimes pitiful responses to horrific events, I actually thought he handled this one pretty well. He said “We condemn in the strongest possible terms, the egregious display of hatred, bigotry and violence on many sides. On many sides. It’s been going on for a long time in our country. It’s not Donald Trump. It’s not Barack Obama. It’s been going on for a long, long time.”

And what happened after that? An onslaught of criticism by political leaders like Governor Andrew Cuomo, demanding that President Trump denounce ONLY White Supremacy. His statement read, in part, “Join me in signing a petition demanding that President Trump acknowledges this hate for what it is: Domestic terrorism willfully perpetrated by white supremacists…. Let’s remind him- the hate and violence in Charlottesville had only one side, and it has no place.”

The hate and violence had only one side? Did he not look at ANY of the images captured that day? Did he not see people from both sides being the aggressors and attacking others, setting fire to Confederate Flags, pepper spraying others, kicking and beating each other? Did he not see the image of a man in a tie dye t-shirt kicking a man cowering on the ground? For every “alt-right” offender, there is another “counter protestor” perpetrating the very same violence. You can’t condemn a White Supremacist for beating a man with a baton, without also condemning a so-called peace lover armed with pepper spray, kicking and stomping another man on the ground and beating him with his own confederate flag on a pole. And for that matter, you can’t call one group evil, without also vilifying the Black Lives Matter movement for advocating cop-killing and retribution violence, and there were plenty of BLM t-shirts and signs in the crowd as well.

And let’s remember something else. Free speech, folks. This group was gathered to protest what they considered to be a re-writing of a chapter of American History. Say what you want about Robert E. Lee or the Confederate Flag, or whether it’s appropriate in a public space. The point is that they had the right to speak their minds without being physically attacked. Just as the despicable Whitesboro Baptist Church has a right to protest military funerals by waving signs that say “God Hates Fags”, and a college has the right to invite Anne Coulter or Alex Jones to speak on campus, or a million women have the right to wear a vagina hat and march on Washington, the White Nationalists had the right to protest the removal of a statue. You can hate the message but you can’t hate the right they have to express it.

And for once, President Trump got it right. There is no place for hatred, bigotry or violence… on ANY side.