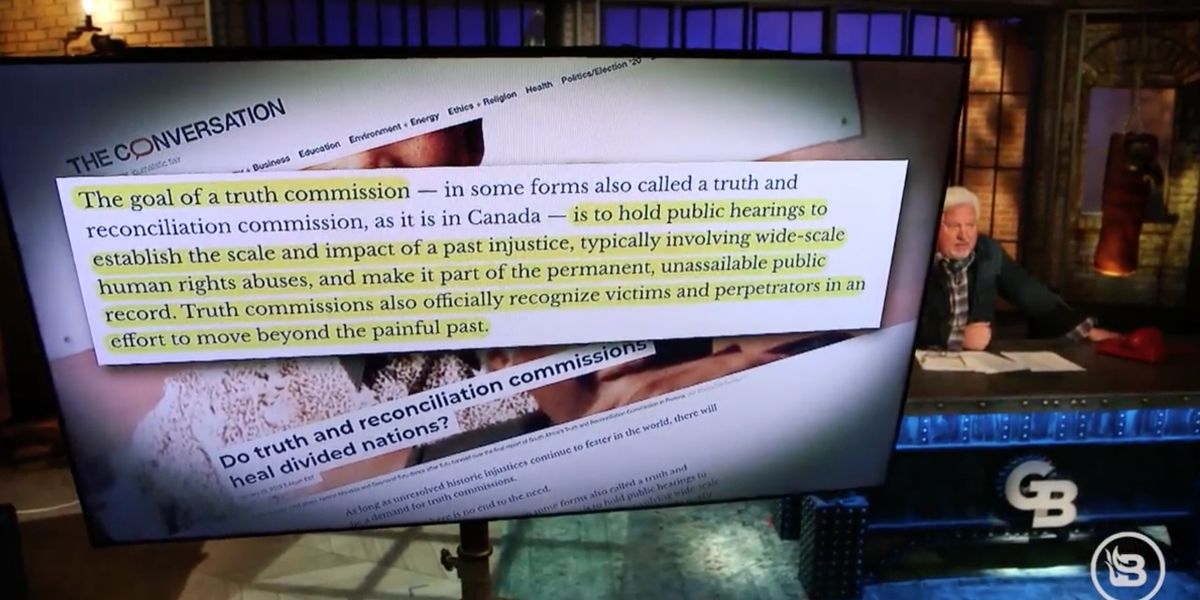 Imagine sometime next year, getting called before HUWAC – the House Un-Woke Activities Committee.

"Are you or have you ever been a member of the un-woke?"

Last week, Robert Reich, the former Secretary of Labor during the Clinton administration, now a UC Berkeley professor, tweeted this:

Since the 1970s, there have been dozens of "Truth Commissions" around the world like the kind Robert Reich wants in America. Most of these have been set up in Africa and Latin America. Usually it happens in countries after a civil war, or where there's been a regime change – a dictator is finally overthrown, and a commission is set up to address atrocities that happened under the dictator. Or, as in the commissions in East Germany and Czechoslovakia, atrocities under communism. Or, in the most famous example, South Africa's Truth and Reconciliation commission addressed the decades of apartheid that ravaged that nation.

These commissions usually conclude with an official final report. These commissions and reports have served as a means of governments trying to close a dark chapter of their country's history, or provide emotional catharsis, as a way to generally move on. Sometimes it kind of works for people, most of the time it leaves people clamoring for more justice.

Here's how one professor described truth commissions in an

The goal of a truth commission… is to hold public hearings to establish the scale and impact of a past injustice, typically involving wide-scale human rights abuses, and make it part of the permanent, unassailable public record. Truth commissions also officially recognize victims and perpetrators in an effort to move beyond the painful past… Some have been used cynically as tools for governments to legitimize themselves by pretending they have dealt with painful history when they have only kicked the can down the road.

See, this is the problem with a lot of "Truth" commissions – they are inherently political. Even if you trust your government and give them all the benefit of the doubt in the world that their Truth commission is trying to do the right thing, it is ALWAYS going to be political. Because these truth commissions are never set up by those who have LOST

power in government. They're always established by those who have WON power.

main points in these Truth commissions is that "the victims become protagonists."

A Department of Anti-racism is entirely within the realm of possibility.

So, who are the victims in Robert Reich's America? People like him, members of the far-Left who had to endure the atrocities of four years of a president with different political ideas. What an injustice. I mean, the left's suffering during the Trump administration is almost on the level of apartheid or genocide – so we totally need a Truth commission.

There have been lots of calls for the U.S. to have its own Truth and Reconciliation commission, especially around racial injustice.

This past June, Democratic Congresswoman Barbara Lee of California introduced legislation to establish the "

Antiracist Baby" – proposes a Constitutional anti-racism amendment. This amendment would:

establish and permanently fund the Department of Anti-racism (DOA) comprised of formally trained experts on racism and no political appointees. The DOA would be responsible for pre-clearing all local, state and federal public policies to ensure they won't yield racial inequity, monitor those policies, investigate private racist policies when racial inequity surfaces, and monitor public officials for expressions of racist ideas. The DOA would be empowered with disciplinary tools to wield over and against policymakers and public officials who do not voluntarily change their racist policy and ideas.

If you think that is far-fetched, you haven't been paying attention to the Left's growing radicalism. In a Joe Biden-Kamala Harris administration, a Department of Anti-racism is entirely within the realm of possibility. And of course, such a DOA would never stop at policing government.

We're in a dangerous, precarious moment in our history. Given the events of 2020, should Democrats gain the White House, the Senate, and the House, how many commissions will be in our future? They will suddenly have plenty of political capital to drag the nation through years of commission hearings.

And the Left's form of justice is never satisfied. You think it will stop at a T&R commission on race? MSNBC's Chris Hayes tweeted this month about the need for a commission to deal with Americans who are skeptical about wearing masks:

Or what about a Truth commission on religion? I mean, look at those reckless churches spreading Covid this year. Or this would be a big one – a T&R commission on climate change deniers.

The Left is highly selective when it comes to truth. That's why they are the very last group you want in charge of anything with "Truth and Reconciliation" in the title.

This is one of the most incredibly frustrating things about the Left in America today. The Left insists there is no such thing as absolute truth, while simultaneously insisting there are certain approved truths that are undeniable.

So, you can't question "Science" – even though that's pretty much what every great scientist in history did.

You can't question racism as the explanation for all of existence – because, well, just

You can't question third-party "Fact-checkers" – because the powers that be, mainly Big Tech right now, have decided they are the Truth referees and you have to trust what they say because they're using certified external fact-checkers. They just forgot to tell you that they actually fund these third-party fact-checkers. It's like if McDonald's told you to trust third-party health inspectors that

they were paying for.

The Left thinks it has a monopoly on Truth. They're the enlightened ones, because they've had the correct instruction, they're privy to the actual facts. It's psychotic arrogance. If you don't buy what they're selling, even if you're just skeptical of it, it's because you either don't have the facts, you willingly deny the facts, or you're simply incapable of grasping the truth because you're blinded by your raging racism problem. It's most likely the racism problem.

The Left never learns from its own preaching. For the past 60-plus years they've decried the House Un-American Activities Committee for trying to root out communists, getting people canceled, ruining Hollywood careers, etcetera. But a HUAC-type committee is precisely what Robert Reich is describing and many on the Left want. It's not enough for Trump to be voted out of office. Americans who helped put him there must be punished. They don't want reconciliation, they want retribution. Because the Left doesn't simply loathe Donald Trump, the Left loathes YOU.